In this article, we discuss the B58 stock fueling limits and upgrades available? What are the limits on the B58 and B58TU fuel systems? What power do B58 HPFP and port injection upgrades become necessary? How do E85 mixtures tie into the fueling limits? We’ll move through this questions and then some. Additionally, we list a few of the best fueling solutions on the market for the BMW B58. 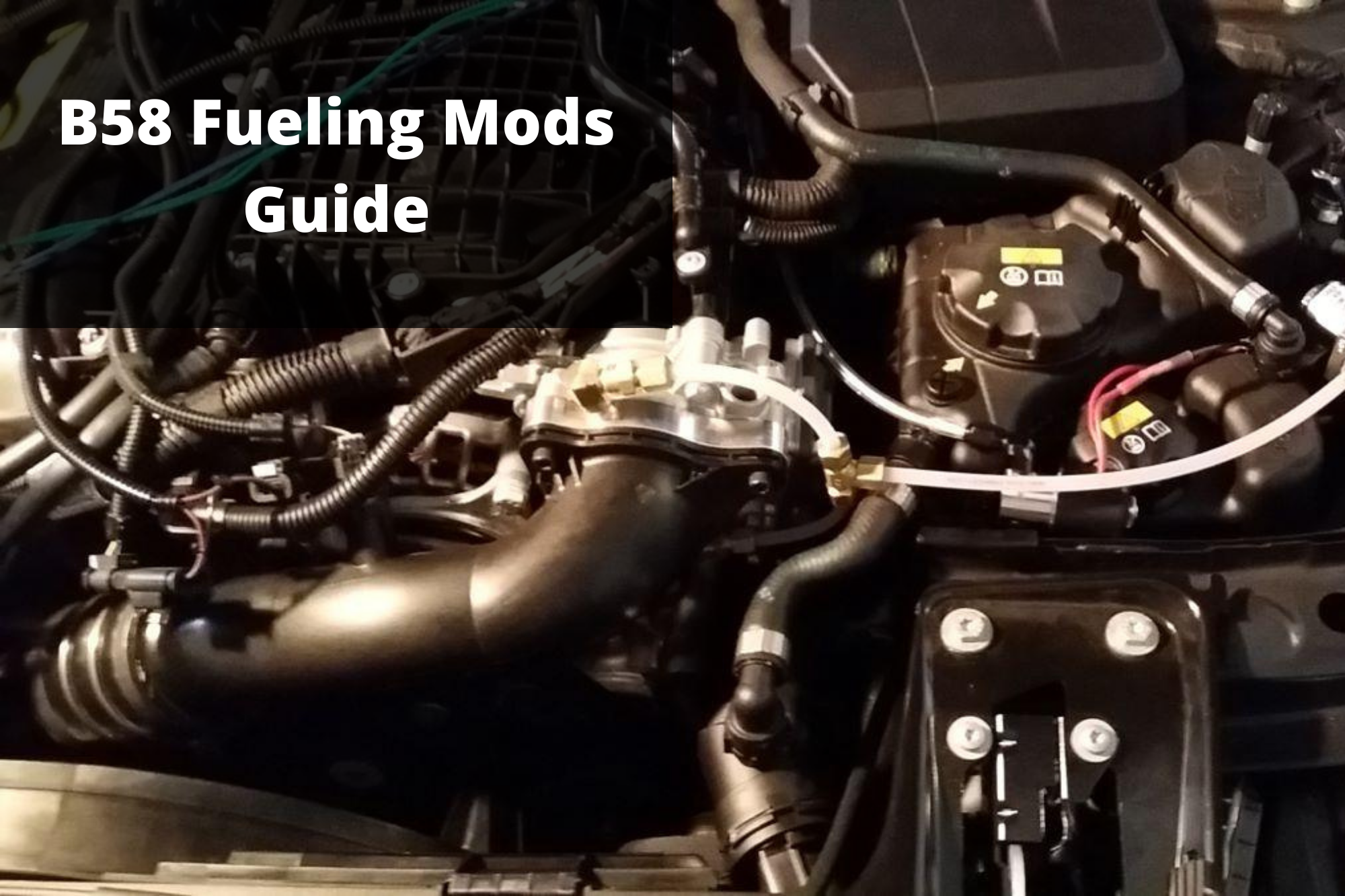 Before moving onto the specific fuel mods let’s lay out the limits of the B58 fuel system. We’ll keep this straight-forward for now, and expand where necessary throughout the article. It’s also important to note – the B58 and B58TU have different upper limits on the stock fuel system. Back to that in a moment. For now we have a few quick notes.

*Fuel limits will vary from B58 to B58. This is true even with the same mods, boost, fuel type, etc. Some of the fueling limits come down to the health of the OE parts. It also varies based on tuning, climate, and many other factors. We don’t recommend pushing the absolute limits of anything. That said, if you are pushing the limits ensure to data-log often and keep an eye on trims, AFR, etc.

All that out of the way – the first limits you’ll reach with the B58 are usually around:

Again, these are rough estimates. Actual numbers can vary from car to car and tune to tune. The B58 stock turbo will max out on pump gas well before the fuel limits. E30 is a lot more demanding on the fuel system. An aggressive tune with E30 will quickly reach the limits even with the stock B58 turbo.

Many also use methanol injection to increase power further without capping the fueling. We wrote a separate guide to B58 methanol injection here. WMI does act as additional fueling for the B58. The exact upper limits of the B58 fuel system with methanol can vary quite a bit. Part of it depends on how heavily you intend to rely on methanol injection.

Building in Some Headroom

Final section before diving into the actual fueling upgrades for the B58 and B58TU engines. We recommend building is some headroom if you’re upgrading your fuel system. The more the better, but 10-20% breathing room will help ensure a reliable and safe setup.

This applies to a lot more than fueling, but it’s a good general rule of thumb. If you want 700whp you probably don’t build your engine to handle 700whp on the dot. You would probably play it safe and build an engine that’s meant to handle 800whp, for example.

The HPFP is the first limit on the stock B58 fueling. Again, power typically caps around the numbers we discussed above. It’s one of the biggest flaws in making more power on the B58 since HPFP mods can be expensive. Port injection is another option some may prefer. However, there are a handful of benefits to upgrading the high-pressure fuel pump and sticking with direct injection.

Most HPFP upgrades around are plug and play solutions. They’re simple to install. HPFP upgrades also don’t require additional fuel lines, nozzles, injectors, etc like methanol or port injection. Also, direct injection remains the only method of fuel delivery. DI is more accurate than PI or CPI on the B58.

Below we’ll dive into a few of the best options for B58 HPFP upgrades. Depending on the specific HPFP upgrade they will allow for 500+whp on 100% E85. Again, exact numbers vary depending on tuning and other factors. As with the stock fueling system, you’ll be able to squeeze out more power by stacking other upgrades like methanol injection.

The below options are certainly far from an exhaustive list. However, they’re a few of the B58 HPFP mods that we believe offer a great balance of price, quality, and proven results.

High-pressure fuel pumps from Dorch Engineering are a common choice for many N55 and B58 owners. Their stage 1 HPFP offers about 36% more flow than the stock B58 HPFP and 10% more than the B58TU. At $1,199 it’s a pretty solid price for a fuel pump that will take the B58 beyond 500whp on direct injection only. Lower E85 blends like E40 or E50 will even allow the B58 to get closer to the 550-600whp ballpark. Great option for those pushing the stock turbo to the limit on heavy E85, or opting for a modest turbo upgrade.

Those looking for more should consider the B58 Dorch Stage 2 HPFP. This pump is good for 500-550+whp on 100% E85. Lower the E85 mix a bit and it will likely support pretty well north of 600whp. Dorch products are excellent quality and highly proven, so it’s hard to go wrong with these options.

Another popular discussion for HPFP mods is fitting the B58TU pump to the standard B58 engine. It’s also referred to as the “Supra” pump. This B58TU HPFP is good for around 550-600whp on pump gas and 450-525whp on low E85 mixtures. It’s a solid option for anyone planning to stick with the stock B58 turbo. This HPFP is good to just about max out the stock turbo without any other fueling solutions.

However, it’s about $1,000 for the upgrade. It makes it a bit less appealing since the Dorch pumps offer quite a bit more flow for not much more money. Again, the B58TU option is solid for those planning to stay on stock turbos and lower E85 mixes. If you’re looking for 500+whp on heavy E85 mixtures then consider the Dorch options above.

We’ll be pretty quick on the charge pipe injection topic for the B58. It’s basically the same concept as water methanol injection. The main difference is, of course, spraying fuel into the charge pipe rather than a water-methanol mix. However, that also means you cannot run both charge pipe methanol and fuel injection. It’s one or the other, which makes CPI a bit less appealing. Nonetheless, B58 CPI is a solid option for those who don’t want to run methanol injection and just need a little more breathing room for fueling.

Really the biggest benefit to charge pipe fuel injection is the relatively low cost. Basic B58 CPI kits like this one from BMS/Fuel-it simple add one extra 950cc injector in the charge pipe. It’s $499 including the chargepipe coupler and JB4 controller. Add in a bit extra if you’re only running a flash tune and need the split second AIC6 controller.

Anyways, it’s a pretty straight-forward setup with only one fuel injector and all of the appropriate accessories. Solid option for those who need a little more fuel, but don’t want to run water-methanol injection on the B58. It’s a little more effort, but you can also run additional injectors if you choose.

It doesn’t tax the HPFP since the CPI kit runs off the low-pressure fuel system – similar to port injection. With the basic 1 injector kit you can expect to support roughly an extra 10-15% power.

Of course, one additional injector is only going to provide so much extra flow. You can add more injectors but that adds cost and complexity. At that point, we believe a HPFP or port injection makes a lot more sense. These CPI kits are primarily intended for those who are nearly maxing their stock B58 fueling and just need a little more headroom.

Also, since the fuel is sprayed into the charge pipe it’s possible for cylinders to receive uneven flow. That can increase the risk of pre-detonation if one cylinder is lacking fuel flow.

Other small benefits to port injection exist. However, the real reason to go with PI is to support 700+whp on heavy E85 blends. If you run out of fueling you can simply upgrade to higher CC injectors. Port injection runs off the low-pressure fueling which is a lot less demanding than the high-pressure system. Point is – port injection is what you’ll be running if you’re looking to make serious power.

For a full B58 port injection upgrade you’ll be looking at somewhere in the ballpark of $1,500 to $2,000+. It also adds a lot of parts between the 6 additional injectors, 2nd fuel rail, fuel lines, PI controller, etc. Install and setup is a lot more complicated than a basic HPFP or CPI upgrade.

Port injection is also less precise than direct injection. It’s a moot point, though. Port injection is highly proven on many platforms and remains the ultimate solution for those looking to make huge power numbers on E85 blends.

Options are still pretty limited for the B58. Not too many are pushing beyond 600-700whp yet. It makes sense since if you’re looking to go much further you’ll want to consider tons of other upgrades. It costs a lot of money to even make enough power to max out a Dorch Stage 2 HPFP coupled with methanol or charge pipe fuel injection.

The B58 is an excellent engine that’s already broken expectations pretty quickly. It’s a very capable engine on the stock turbo, and even more so with a larger turbo. However, the HPFP remains one of the weaker points of pushing the B58 to 400-500+whp. HPFP upgrades are typically the first option to take the B58 to the next level. Dorch Engineering offers two great solutions and B58 owners might also consider the more capable B58TU fuel pump.

Those who just need a little more fueling are likely best suited to charge pipe fuel or water-methanol injection. Those options take some stress off the B58 high-pressure fuel system. Otherwise, those with big power goals will likely need to consider port injection options. These kits are pricey and a bit more complex, but can easily support well north of 700whp – even on 100% E85.

What fueling mods do you have on your B58? Which are you considering?

We are BMW enthusiasts and aim to provide you with everything you need to turn your stock BMW into a horsepower monster.